The past year and a half working on MAR Orthotics, previously MAR Designs, has been a fantastic adventure. But after having explored the space, we have decided that it is time to close our venture. Ultimately, we think that while it is extremely important that people continue to innovate in the orthotics space, we are not the best suited to do so. The innovations needed in orthotics are still nascent and require significant academic and clinical research before commercialization. Even our simple prototypes of adding just one or two sensors to existing orthotics would require significant clinical validation. This is before we could bring a device to market, and generate revenue, much less profit, which simply isn’t in the cards for us as Ph.D. students. Despite this, we want to communicate our journey and insights for the next would-be orthotics innovator and to help highlight how much room for innovation there is in the space.

Please feel free to reach out to us personally (contacts at end) if you’re interested in chatting more about our attempt with MAR Orthotics or your next innovation :)

Seeing the Need for Innovation in Orthotics

It all started with Michael, a rehabilitation roboticist, who was working with children with cerebral palsy as part of his research. He saw from interacting with parents and children that the orthotics given as treatment for spastic cerebral palsy were uncomfortable. This led to fights in families, where children were in pain and had trouble sleeping with their orthotics, while parents were trying to help ensure the long-term health of their kids. Michael had tossed around ideas for a while, but never found the right one to pursue or the right time.

MAR Orthotics really began when Michael and Ariella decided to do something a bit outside of their research and join a hackathon, specifically the Rothberg Catalyzer, a medical device “makerthon” at the University of Pennsylvania. They threw around ideas for medical devices that they could design, and Michael mentioned the challenges he had seen with orthotics. Ariella was sold, they would take up the challenge. But they needed one more person. They both knew a world class maker who seemed like the perfect person to round out the team, Rebecca.

With doctors as advisors and culminating with a pitch competition, the Rothberg Catalyzer was the perfect playground for our ideas. By the end of the competition we came up with a simple design for a motorized orthotic. The premise of our idea was that a motor can be used to stretch a wrist in a slow, drawn out process, allowing a child to sleep more comfortably while dawning the device. After showcasing our prototype, we won 1st place in the competition!

Take a look at our early prototype presented in the Rothberg Catalyzer: 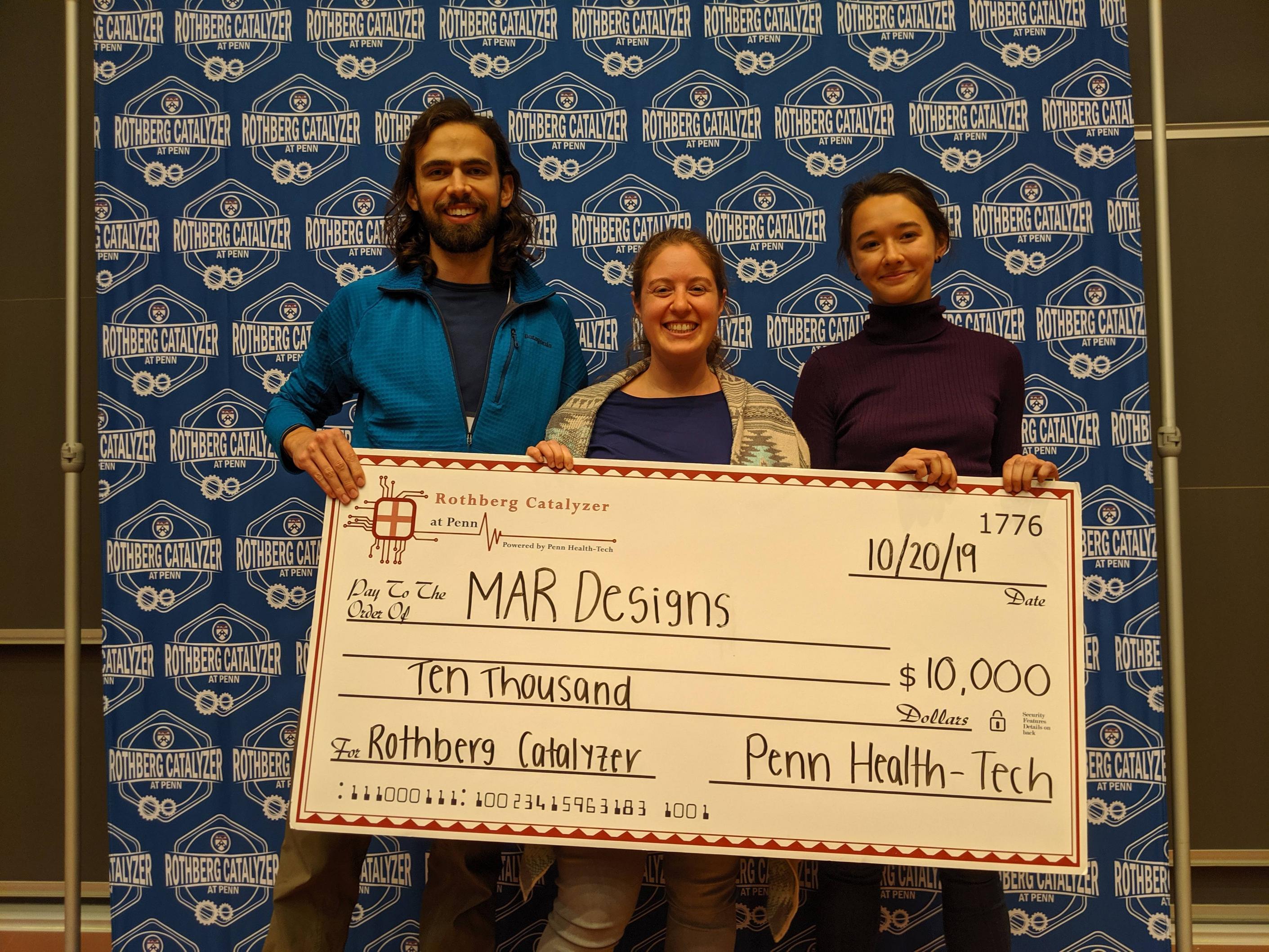 Fresh off the success of the Rothberg Catalyzer, we wanted a deeper understanding of the business aspect of our venture. The Wharton Startup Challenge allowed us to do just that. We prepared hard and delved into the nuances of the orthotics market. We got help from experts at Wharton and continued support from Penn Health-Tech to refine our ideas.

At the culmination of this competition, we presented a pitch to judges with business, venture capital, and medical device experience. Thinking about their questions around the marketplace and insurance landscape helped us gain a deeper understanding of the steps it takes to create a successful venture. We were honored to be awarded the innovation award ($25K) for our work.

Learning in the Penn Entrepreneurship Ecosystem

Penn has an incredible ecosystem to foster innovation and entrepreneurship. As we worked to develop MAR Orthotics, we were able to tap into multiple resources to help us learn and develop the venture.

After the Rothberg Catalyzer, we knew that we had an exciting idea. But it still needed a lot of validation. Penn I-CORPS helped us to connect with health care providers and patients to better understand both the need and the business.

We joined the Penn Venture Lab to connect with the broader startup community at Penn. We were able to access resources to help us plan the business behind MAR. We also joined VIP-C, a group of entrepreneurs interested in helping each other bring their startups to life.

Talking to clinicians and parents, we repeatedly heard that there is a need for more research into orthotics. There was a lack of clarity among clinicians as to when different orthotic tools are best and how well they work. Most clinicians did not have a clear idea of how high compliance with treatment is and we heard concerns about payment being rejected as a result.

We think embedding simple sensors would be useful in both clinical trials on the effectiveness and the use of orthotics and to track treatment in practice. For example, in the video below, we demonstrate an accelerometer that can be placed on the outside of a device to obtain data on movement (and from there determine usage). It would be relatively simple to miniaturize such a device to be seamless with the orthosis.

We also think the use of stress and strain sensors within orthoses would be interesting. These could help deepen our understanding of how the body is resisting the stretch in an orthotic over time. Finding the right sensors for this task and placing them properly is an open question.

In general, the orthotics space and more broadly the rehab technology space has so much opportunity for innovation. We hope that more people will put their brains into improving these devices and tools. Fundamental questions need to be answered about the usage of orthoses, that isn’t feasible for a small startup. But we believe that an academic lab working in this space would find rich questions to answer and exciting challenges to tackle. And then with new discoveries, it would be the right time to introduce a new orthosis to the market.

A huge thanks to all the people that helped us on our journey, the communities at Penn, the patients, parents, providers, judges, and others. We have learned a ton and had a great time. We hope that someone has seen our work and been moved to carry it forward.